Most people think this is an issue for children.  Well, PTSD arrest growth and some adults, namely me, act like children.  I found this information useful for me. 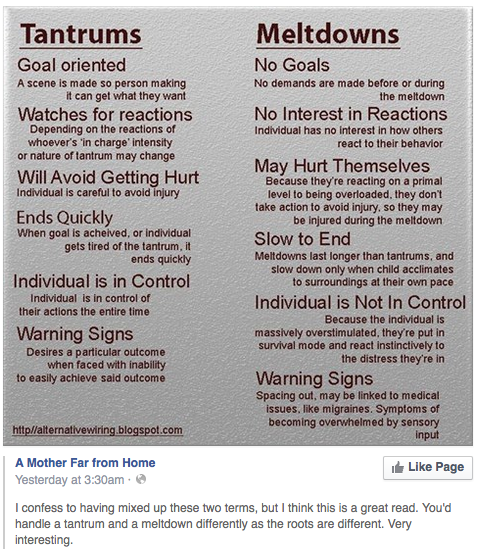 Counseling ripped away the fragile lock I had on my emotions.  I started having meltdowns but I was accused of having tantrums.  I was confused, scared and felt guilty.  Fortunately I had one of the meltdowns during a counseling session and my counselor talked me through it and assured me it wasn’t a tantrum.  I also felt a tantrum coming on and chose to quit that in a hurry, even if I have to send myself to my room for hours.  Meltdowns however are totally different.  I’ve had them in doctor offices, karate class, and other inconvenient places.  Some meltdowns are massive triggers that set off a primal reaction that has little or nothing to do with behaving as an adult.  Meltdowns can be worse or better by the reaction of others.  The doctor moved offices and refused to give me a forwarding address.  She insisted I see someone else.  Her reaction intensified my embarrassment.  However, my karate instructor was totally different.  I had a melt down in karate class.  He gave me space.  Checked in to make sure I was coping.  When I apologized, with great gentleness he assured me I had nothing to apologize for.  He also didn’t change how he treated me.  He continued to treat me with respect before and afterwards.  I was amazed that my sobbing meltdown was no need to worry or apologize from his perspective.  It was simply allowed.  I usually recognize the signs and isolate myself but there were a few times that it hit so suddenly and so hard all I could do was curl in on myself and weather the storm.  I dislike tantrums because that was how I was manipulated as a child.  I am learning to accept meltdowns as part of my life with PTSD.  Sometimes my whole system is overwhelmed by emotions and memories.  It doesn’t kill me and I don’t feel stronger afterwards.  I am trying to act how my karate teacher said, “You have nothing to apologize for.”

2 thoughts on “Tantrums vs Meltdowns”